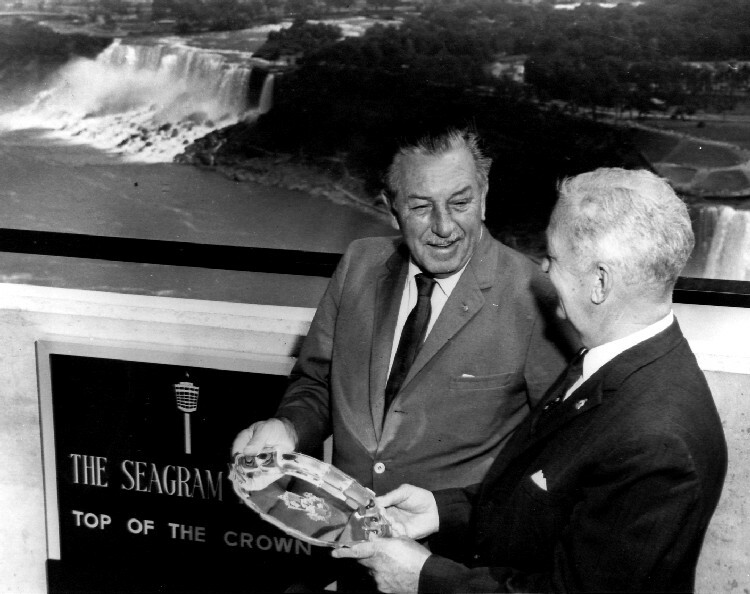 Walt Disney at the Seagram Tower, American and Bridal Falls in background

Walt Disney visited Niagara Falls on August 6th, 1963. He was accompanied by his wife Lillian, his brother Roy and sister-in-law Edna. Although he denied it at the time, Walt Disney briefly considered Niagara Falls as a location for his yet to be built Disney World before ultimately choosing Orlando, Florida.

Walt Disney was invited to visit Niagara Falls by the Seagram Liquor Company, who owned the newly built Seagram Tower (later renamed the Minolta Tower, now the Tower Hotel). When he arrived at the tower, Mr. Disney was mobbed by tourists wanting autographs and he didn’t seem to mind: “I see so many of them at Disneyland and I love them all”.

The Disneys were joined by the President of the Niagara Tower Co. and Niagara Falls Mayor Franklin J. Miller. After making their way to the top of the tower and listening to Mayor Miller speak about the history of the falls, Mr. Disney was indeed impressed with the view from the tower: “I think the tower is wonderful. It certainly gives you the best perspective possible.” After spending the night at the Hotel Sheraton Brock, the Disney party continued on their tour of the United States.

Although Mr. Disney was captivated with the Falls and surrounding area, he was looking for a year-round location and knew that the cold Niagara winters would hinder his plans. The trip did give Walt Disney another idea to partner with Seagrams to create a “Rocket to the Moon” ride on the Seagram Tower. The ride would be similar to the one that he created in Disneyland’s Tomorrowland. Unfortunately, the two parties were never able to agree on a licencing agreement for the ride.